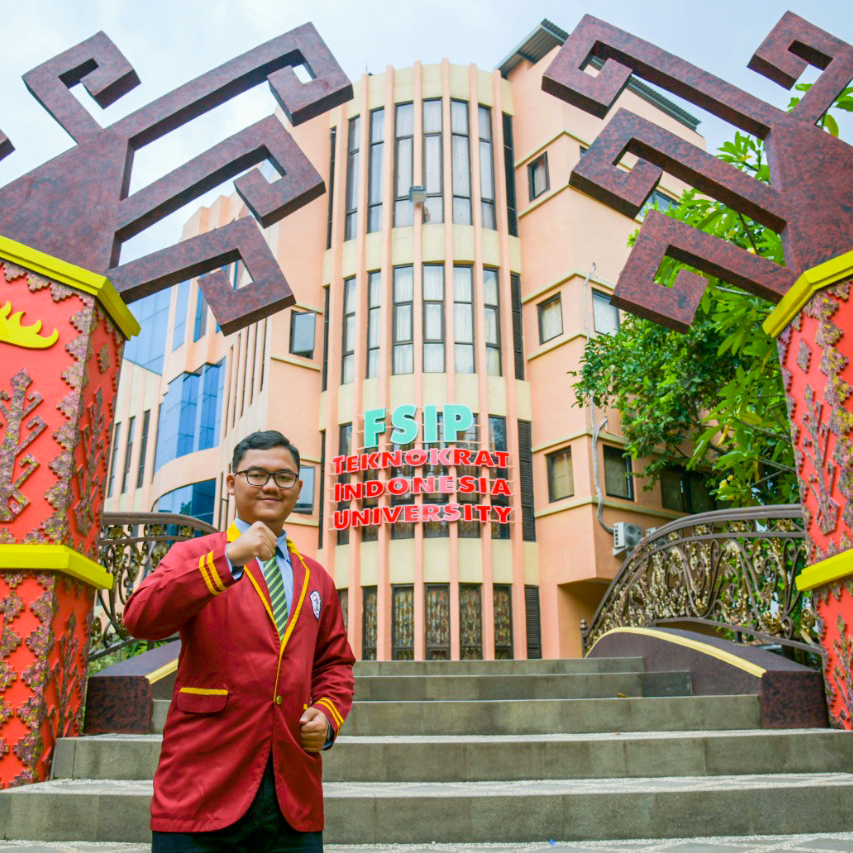 Students of ASEAN’s best private university Universitas Teknokrat Indonesia have again won achievements in the field of English. This time it is an English Storytelling competition at the ALSA English Competition organized by a group of Law Faculty students who are members of the University of Indonesia’s ALSA Local Chapter. Bagas Maulana, a student of the 2019 English Literature study program came out as the 1st winner in this prestigious competition.
Bagas managed to become the 1st place after going through two rounds, namely the preliminary round and the final round. In the preliminary round, Bagas made a storytelling video with the theme of the environment. Bagas tells the story of a zoo officer and his friend who live in the year 2077. They are gradually feeling the destruction of the world’s ecosystems starting from withered trees, the sky is full of black clouds, and the sea has lost 100% of its fish. In this dystopia, Kaanan as the main character tries to fix the world, but unfortunately it is too late because the actions of one person will no longer have an impact on the damaged earth.
The story brought Bagas into the Big 10 round. In this Act, Bagas appears in the last sequence with a story about the life of an informant in the year 2140 far in the future where everyone has their own robot (Mechanical Assistant Intelligent Device or MAID). Ryker, the main character, tries to investigate why there are robots that can kill humans and then commit suicide even though there are no orders. In the end he realized that the robot that had been given kindness by humans could change and have a heart like humans, who feel sad when they see their kind owner killed. The robot that killed the human turned out to be a robot of a kind-hearted professor who killed out of pure revenge and killed himself because his task had been completed. This story about the future world led Bagas to become the 1st winner in storytelling which was attended by the best 25 participants from various universities in Indonesia. In the training process, Bagas was assisted by Dina Amelia, M.Hum. a lecturer in the English Literature Study Program who is a storytelling coach for the English Club Teknocrats.

Bagas Maulana is an English Literature student who specializes in writing short stories and storytelling. He has published an anthology of short stories in 2022 entitled “Chorniverse” which contains fantasy stories about the future. Currently, he is also developing a social project with environmental themes, namely Stories of Cemara, namely environmental awareness education for children through stories.
Suprayogi, S.S., M. Hum. stated “I am very grateful that this year Universitas Teknokrat Indonesia can win the storytelling branch and get first place because this competition is very competitive and difficult to penetrate. Students’ abilities also continue to be honed. Bagas two years ago was the top 10 finalists. That is, students continue to learn and never give up to be consistent in participating in the competition until they finally succeed.
Vice Rector of Universitas Teknokrat Indonesia Dr. H. Mahathir Muhammad, SE., MM. very proud of the achievements that have been achieved by Bagas who won 1st Place in the English Storytelling Contest at the national level.
“Hopefully this achievement will motivate other students to become champions,” he said.
Mahathir said, English has indeed been one of the advantages of his campus so far. In addition, there are computers and robotics which often become national champions for students.
Mahathir said his gratitude was also conveyed to the mentors who succeeded in bringing their students to become champions. Mahathir wants there to be continuous regeneration so that Universitas Teknokrat Indonesia does not lack champions