UNIVERSITAS TEKNOKRAT INDONESIA SIGN MCC WITH A LANGUAGE BOARD 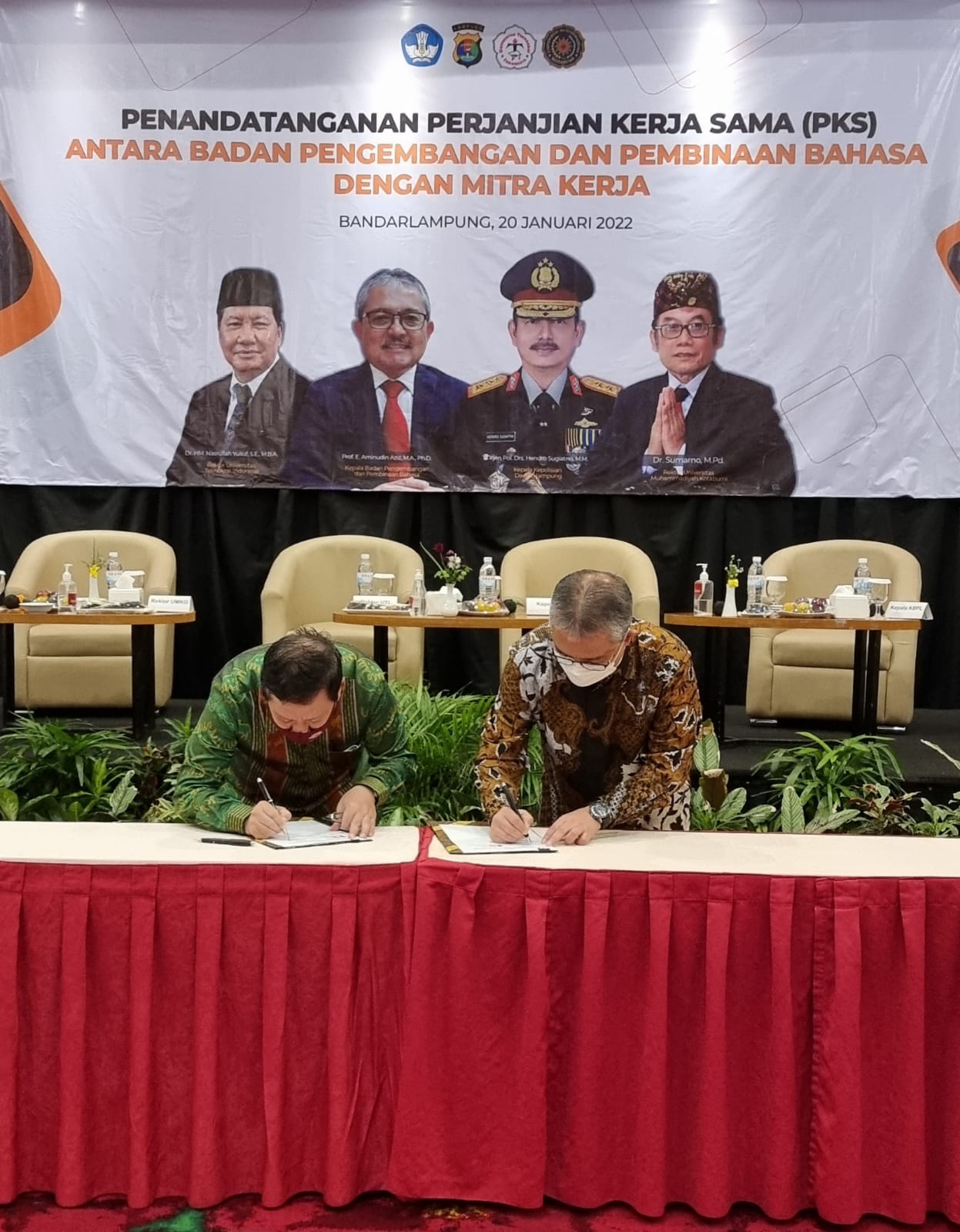 To elevate the dignity of the Indonesian language, the Language Development and Development Agency of the Ministry of Education and Culture collaborated with partners including the Universitas Teknokrat Indonesia(UTI) Green Campus Sang Champion Thursday (20/1) at Emersia Hotel and Resort.

The signing of the Cooperation Agreement (PKS) was carried out by the Head of the Language Development and Development Agency of the Ministry of Education and Technology Prof. E. Aminudin Aziz, M.A., Ph.D. with the Chancellor of UTI Dr. H Nasrullah Yusuf, SE., MBA., witnessed by the Head of Language Office Eva Krisna and other invited guests.

Head of the Kemendikbudristek Language Development and Development Agency Prof. E. Aminudin Aziz, M.A., Ph.D. said if the implementation of the contents of the agreement is the main thing by involving universities to the police.

“Hopefully this can be followed up immediately, and not just a signature. But moving to realize a shared vision and mission,” he said.

Chancellor of the Universitas Teknokrat Indonesia Dr. HM Nasrullah Yusuf, SE., MBA. The development of a language, including Indonesian, cannot be separated from the world of education.

“Including how students can not only speak Indonesian properly and correctly, but also can convey well regarding their needs,” said Dr. Nasrallah in his speech.

He explained, various awards and achievements from lecturers and students from the Universitas Teknokrat Indonesia at International and National.

“This is one way to raise our universities at the International and National level, we are also heading for a World Class University,” he continued.

Dr. Nasrullah hopes that the achievements of the Universitas Teknokrat Indonesia Best PTS Sumatra can inspire all parties.

In the event there was also a speech degree Dr. Nasrullah was one of the speakers. He said that the use of Indonesian in public spaces should not only be good and right, but also be appropriate. This needs to be campaigned on an ongoing basis.

“In addition, many people can speak but cannot hear well, this is something that must also be addressed in the future. Then you must also be able to speak Indonesian properly and correctly when writing,” he explained.

“We convey language not only speaking, writing, and listening. But also through digital literacy. That also needs to be thought about,” said Dr. Nasrallah further.

UTI Chancellor Dr. Nasrullah said that in the world there are many languages that attract the world’s attention, especially big countries such as China, Arabic, Korean, English which are worldwide. This can happen due to many factors including Education and Trade.

“Like Arabic, Chinese, and others, it’s because of trade as well as education. For this education factor, Indonesia can attract foreign students. Or if you want to accept foreign students, say Palestine, they have to learn the language first so they don’t have problems later,” he said.

In addition, the chancellor, who recently received the best songwriter award from the Indonesian Chancellor Forum, also mentioned that the lecturer who is currently studying in Ireland introduced the Indonesian language used by the mass media.

“They show the articles written in the newspapers here to the lecturers there, this is the language used,” he said.

In addition, the digital literacy program that has been used by the Universitas  Teknokrat Indonesia for a long time can be a new thought, so as not to be fixated on new things.

“It is necessary to encourage good language, the Universitas Teknokrat Indonesia has carried out digital literacy in a different way of delivery.

said Dr. Nasrullah In conclusion, we convey that language is no longer writing, speaking, but listening using digital literacy, from practice it must be a new thought and motivation,” he said.