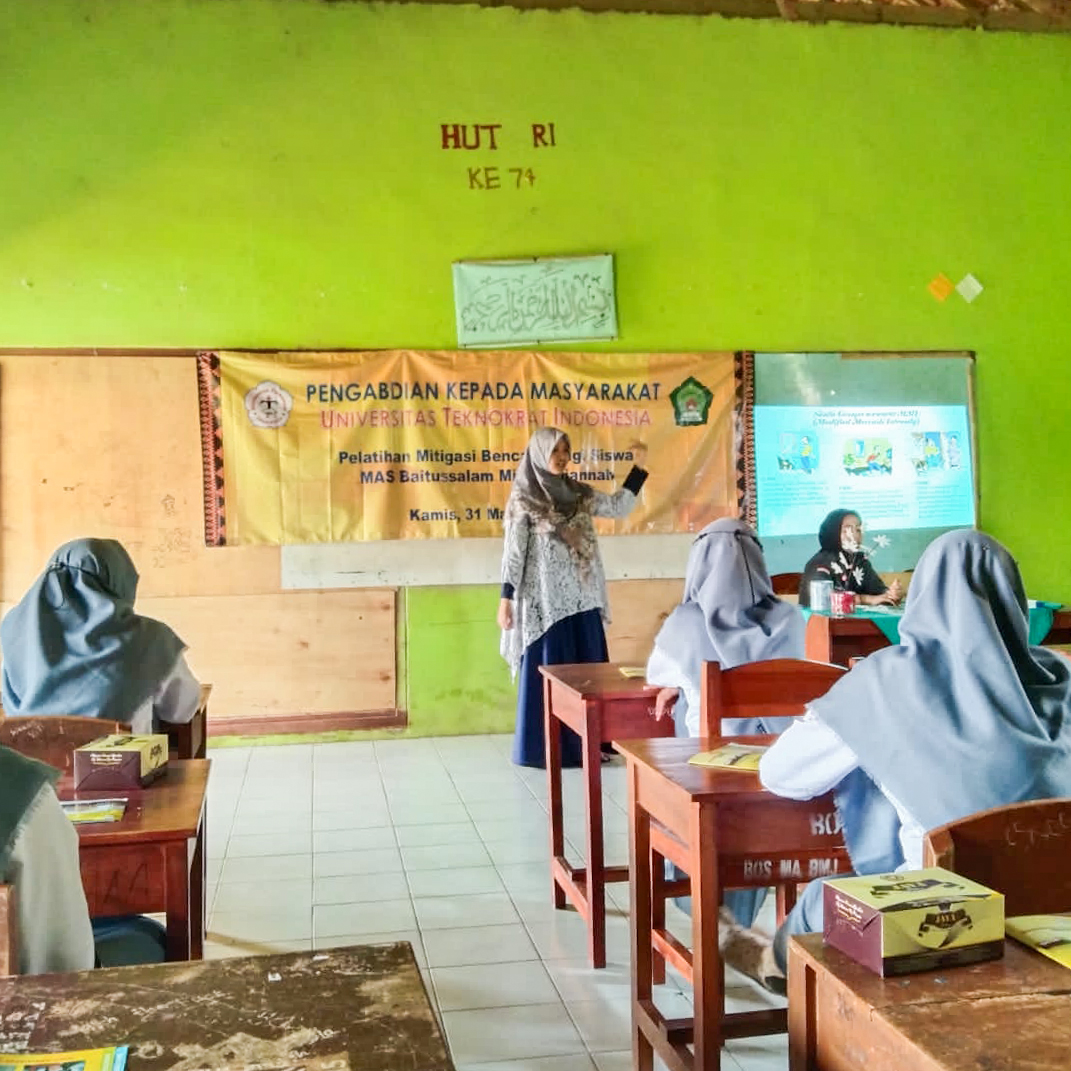 ASEAN’s Best Private University Universitas Teknokrat Indonesia carried out Community Service of the Targeted Schools at MAS BAITUSSALAM MIFTAHUL JANNAH Central Lampung, which was held on Thursday, March 31, 2022.
The Community Service (PKM) activity for the target schools was attended by the Head Master of MAS BAITUSSALAM MIFTAHUL JANNAH, Jumariyanto, M.Pd. who was in his speech expressed his gratitude to the Universitas Teknokrat Indonesia, Campus of the Champion, which has fostered our school, especially the teachers and students. The PKM Fostered Schools with an activity program in the form of training on several information technologies to prepare the nation’s successors, namely students who will be ready to face the world globally. Don’t waste this training opportunity, said the school principal JUMARIYANTO.
The PKM Team of the Schools Assisted by Lecturers at Universitas Teknokrat Indonesia Green Campus was the winner, chaired by Novia Utami Putri, M. T. together with other teams, namely Qadhli Jafar Adrian, MIT., Jaka Persada Sembiring, M.Cs, Dian Pratiwi, M. Eng. and Akhmad Jayadi, M.Cs. In this activity, the lecturers were accompanied by electrical engineering and civil engineering students including I Wayan Sudana, Fajar Anggit, Okky Adi Darmawan, Wayan Rio Adi Pratama, Fresti and Cindy Rahma Dwi Jayanti. They are students with high achievement who are prepared to become cadres in PKM Assisted Schools and other activities.
This training aims to provide insight and understanding of the importance of information technology in the current era of globalization.
In this PKM Assisted School, Lecturers, and Students of Universitas Teknokrat Indonesia Campus Hijau Sang Juara have carried out school-based Disaster Mitigation training provided by Dian Pratiwi, S. T., M. Eng, in this training students are very enthusiastic because this disaster mitigation training they can detect the scale of the disaster of an earthquake with the MMI (Modified Mercaili Intensity) scale and anticipate the occurrence of earthquakes so that before the disaster, during the disaster, and after the disaster. This can be an important point in growing the resilience of the school and the academic community in the MAS BAITUSSALAM MIFTAHUL JANNAH school environment.