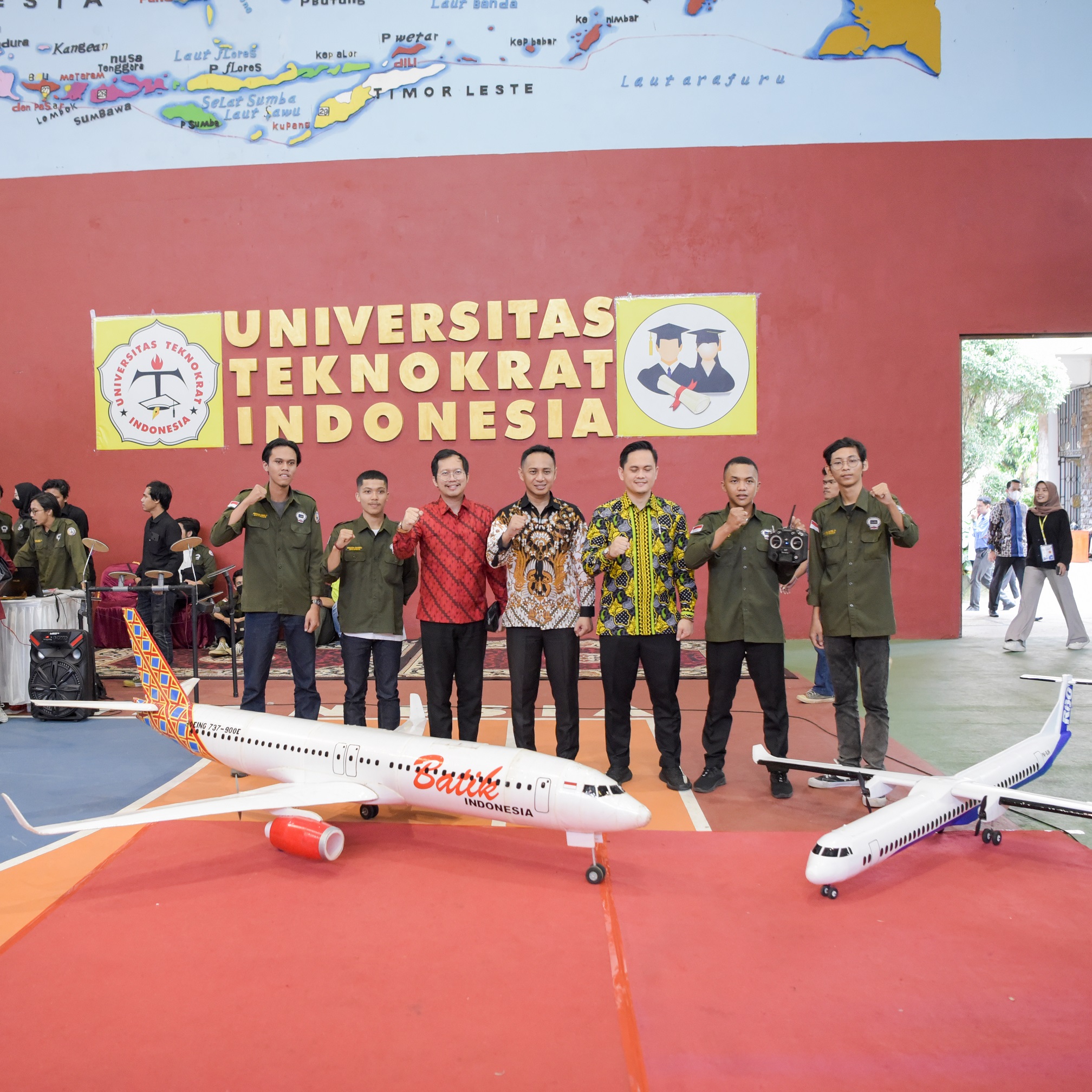 The work of Universitas Teknokrat Indonesia students, namely airplanes, was exhibited at the 2022 Academic Expo held by Universitas Teknokrat Indonesia, at Student Center DR. HM Nasrullah Yusuf, MBA, Tuesday (5/7/2022).
A remote control aircraft made by Firman Fahrudin, a student of the Bachelor of Electrical Engineering Study Program, Faculty of Engineering and Computer Science, Universitas Teknokrat Indonesia batch 2020, from Bandar Agung Village, Bandar Sribawono District, East Lampung Regency. RC aircraft are aircraft that have a 1:100 scale of the original aircraft, model aircraft or often also referred to as Aeromodeling, Aeromodeling itself is an aircraft that is generally controlled by radio wave watt remote control by ground pilots.
The RC (Remote Control) aircraft created by Firman is jumbo in size, which is 350 x 300 cm in size, using styrofoam and additional multiplex. To power the electronic supply using a battery with a thrust using brushless motors on both wings.
According to Firman, currently, aeromodelling aircraft are widely used for aerial photography, mapping monitoring, and even widely used in the military field, which is currently a hot issue in various countries. Its wide use is of course accompanied by progress and development of automatic control systems on aircraft so that pilots only need to input position data where the aircraft must fly and the aircraft will fly following the path without having to be controlled directly. by pilots, this technology is known as drones (unmanned aircraft). Please note that drones are not only limited to aircraft vehicles such as helicopters, ships, submarines, cars, and others.

Firman said that aeromodelling enthusiasts who want to start this activity can visit or contact the local or nearest aeromodelling association for information and technical guidance. In addition, it can be obtained through both print and electronic mass about aerospace in general and aeromodelling in particular.
He said that in Indonesia, there is a community, one of which is called the “Indonesian Aeromodeling Community (KAI)” which aims to accommodate Indonesian Aeromodelling hobbyists who were founded in 2015. “In the community itself, we often (share knowledge) about aeromodelling. , said Firman.
For Aeromodelling aircraft itself, there are 2 types, namely lane of the site (LOST as far as the eye can see) and FPV (first-person view). according to what we need with the addition of better electronics, and for the height itself, which is a maximum of 120 m. For the price itself, the most common aeromodelling hobbyist is 2 million for the standard type with a width of 100-150 cm.
The existence of the Aeromodeling aircraft made by Firman, which was also exhibited at the Academic Expo, received special attention and appreciation from the Vice-Rector of Universitas Teknokrat Indonesia, Dr. H. Mahathir Muhammad, SE, MM. Mr. Mahathir said that the Aeromodeling aircraft could motivate other students to continue to innovate. (Teknokrat).