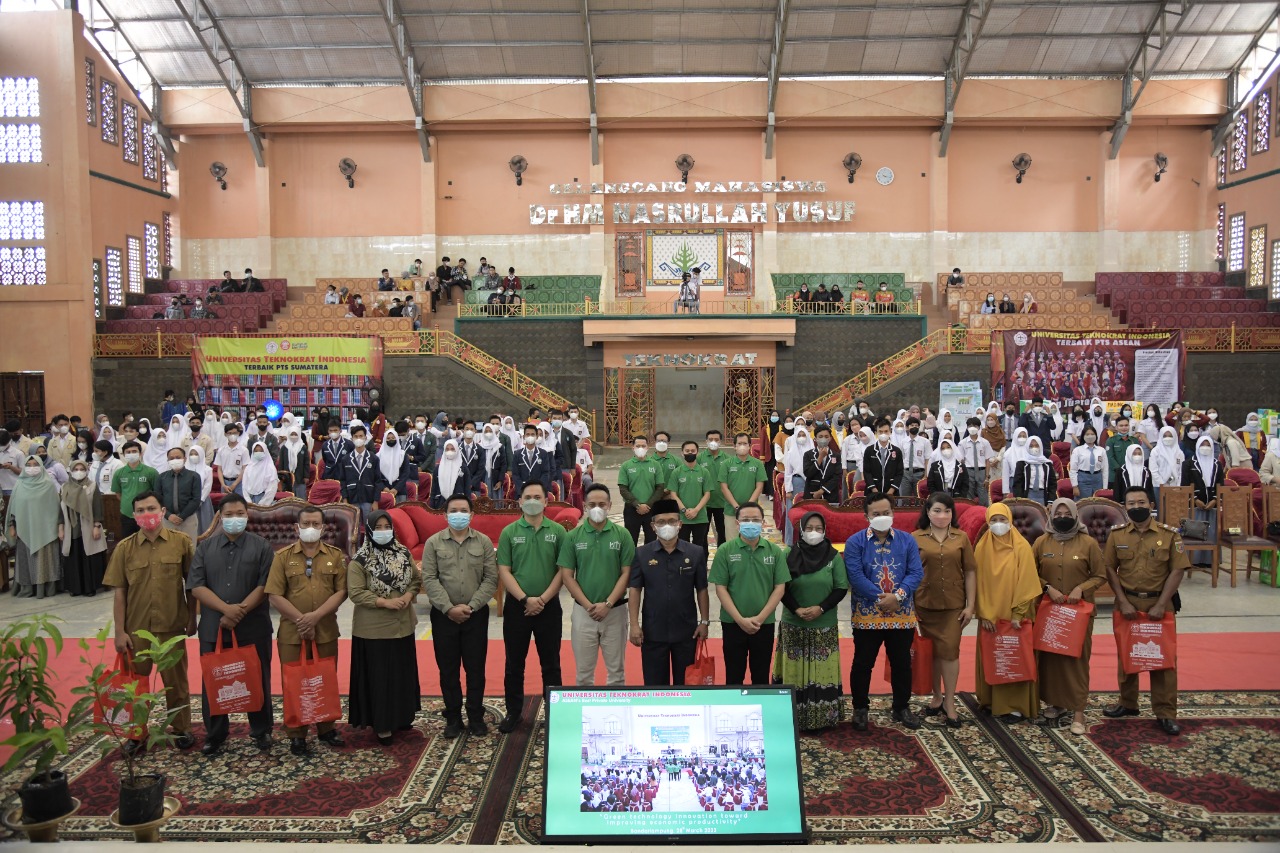 Universitas Teknokrat Indonesia ASEAN’s Best Private University, the Champion’s Green Campus held a tree planting in the garden of Asmaul Yusuf Mosque on the local campus. This is part of the Teknokrat Green Festival 2022 series with the theme “Green Technology Innovation Economy Productivity” which will be held from 25 -28 March 2022.

The tree planting was carried out Vice Rector IV for Cooperation, Achmad Yudi Wahyudin. S.Pd. M.Pd., and also as a resource person who was the Principal of SMA YP UNILA Bandar Lampung Mapful. M.Pd., along with accompanying teachers.

This program would be continued with the implementation of the 1,000 tree planting program in the coastal area of Lampung.

Achmad Yudi expressed his gratitude to Allah SWT because his party was given the opportunity and health to participate in this activity.

Achmad Yudi said that the Green Festival 2022 activity at Universitas Teknokrat Indonesia student arena was motivated by our enthusiasm to commemorate and also continue to promote the agenda for preserving the earth’s environment.
Achmad Yudi said, Universitas Teknokrat Indonesia has a vision to become a center of excellence in the field of education, research and innovation, especially in the field of sustainable development.

Currently, Universitas Teknocrat Indonesia is the best private campus outside Java and is the only private university in Lampung that is included in the criteria for the UI Greenmetric World University Green Campus.
The ranking is measured from 6 indicators, namely: Setting and Infrastructure, Research and Education, Waste Management, Water Management, Energy and Climate Change and Transportation.

Youth, said Achmad Yudi, have a big role in keeping the earth and the natural surroundings sustainable, supported by the use of environmentally friendly technology.

The earth that exists today, continued Achmad Yudi, is not only for us but for our children and grandchildren in the future. For this reason, Universitas Teknokrat Indonesia has a vision to be a superior who is always present in the midst of society in promoting green technology and green policies. Where as citizens of Indonesia need to contribute to the world in order to protect our beloved earth from global warming.
Where global warming has become an issue that is very, very concerned by the world community today. “If not us, who else will take care of the environment around us. Let’s start with ourselves. Alhamdulillah, here, Universitas Teknocrat Indonesia, through our festival programs, tries to provide at least an example of what we can do together as an educational unit, both from SMA/SMK and tertiary institutions, to try to create innovations in creating policies and activities for our students. us to participate and be sensitive to global issues,” said Achmad Yudi.

In this activity, more than 68 programs created by Universitas Teknokrat Indonesia students such as recycle applications and technology are among the ones that appear here. This Expo is one of the forums and examples of how to implement project based learning, as in his remarks the Minister of Education, Culture and Research Technology emphasized the importance of project-based learning, student-centered learning. Where the role of the teacher is now not central to being a source of knowledge, but also a facilitator. “This is where our own role is how we empower our students, SMA / SMK / MA students to continue to be able to innovate on the latest issues that are required in learning,” continued Achmad Yudi.

Mahathir said, Universitas Teknokrat Indonesia prioritizes good environmental quality. Because, this is where the comfortable and fun learning atmosphere grows.

Besides being strong in academics, Universitas Teknokrat Indonesia also wants to play a role in preserving nature and its ecosystem. (Teknokrat)