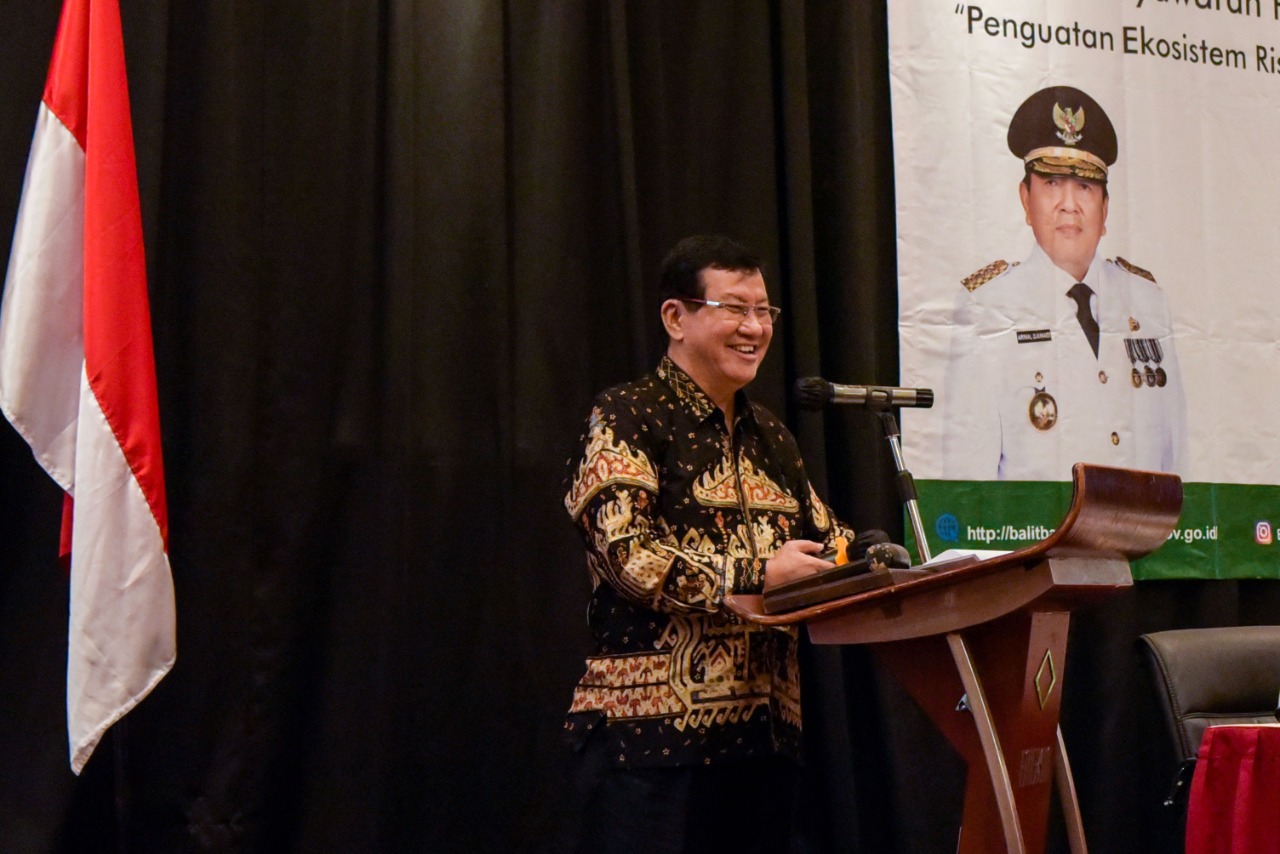 The event was officially opened by the Governor of Lampung Ir. H. Arinal Djunaidi who was represented by the Head of Research and Development Agency of Lampung Province, Ir. Hamartoni Ahadis, M.Sc.

The resource persons in the event other than Dr. HM Nasrallah Yusuf, SE. MBA. The Rector of the Universitas Teknokrat Indonesia as well as the Deputy Chair of the Advisory Council of the Indonesian Rectors Forum, namely Marindo Kurniawan, ST., MM. as Head of the Lampung Province BPKAD, Lalu Dr. eng. Widi Astuti from UPI Tanjung Bintang and Paijo, SKM., M.Kes. as Head of Research and Development of West Lampung Regency.

On that occasion, The Rector of Universitas Teknokrat Indonesia , Mr. Nasrullah explained that referring to law number 12 of 2012 concerning education, the function of education is to develop an academic community that is innovative, responsive, creative, skilled and competitive, through the implementation of the Tridharma.

“Because of its relationship with the region, innovation aims to improve the performance of regional government administration,” said Nasrullah Record.

Then, the purpose of higher education in accordance with Article 5 of Law No. 12 of 2012 is to produce graduates who master the branch of science and technology to meet the national interest and increase the nation’s competitiveness.

Furthermore, science and technology are produced through research that pays attention to and applies the values of the humanities to benefit humanity.

Thus, the realization of reasoning-based community service and research work that is useful in advancing public welfare and educating the nation’s life. “Because the relationship with the region is that innovation aims to improve performance.

“So the function and purpose of higher education is the center for developing the nation’s civilization to improve public services, empower and participate in the community, and increase regional competitiveness,” explained Nasrullah.

As resource person Nasrullah said, Teknokrat are not lacking in generating new ideas and new creations for development. All forms of creation and innovation are always shown to the public as the responsibility of academic people to the community.

According to Nasrullah, a graduate of Michigan University, universities, especially Teknokrat who are private, are willing and able to allocate funds for research. All competitions that mobilize creations and innovations at the national level are always followed by Teknokrat.
The National and Asean robotics competitions by Teknokrat students are often won by Teknokrat. Another work is the electric car, which has been developed by the campus since 2016, and the student innovation work is strongly supported by Teknokrat.

The creations and innovations of Teknokrat students are always exhibited to the public. Even in the most recent expo, the Head of the Lampung Research and Development Agency, Hamartoni Ahadis, was also present, said Nasrullah.

It is not easy to make something creative and innovative. The campus, said Nasrullah, always wants to allocate a budget to make it happen. Although the range of funds is quite large, said Nasrullah, Teknokrat consider it an investment and a form of contribution to the community, including local governments. Nasrallah acknowledged that.

Nasrullah also appreciated the innovations of lecturers and students in developing many applications that can be used widely. For example, the application for checking the voter list in the DPT collaborated with the KPU Bandar Lampung in last year’s election.

Likewise other applications that collaborate with many parties and get appreciation. For example with the Ministry of Law and Human Rights, the Lampung Police, the Lampung High Court, Brigif 4 Mar/BS Piabung Lampung, the Bandar Lampung City Kodim, and districts in Lampung.

In the future, said Nasrullah, Teknokrat will continue to make other innovations. The goal is to implement knowledge on campus in the form of products that can be used by the community. He is open with other parties to synergize so that the products produced are better and can be made more. (Teknokrat).