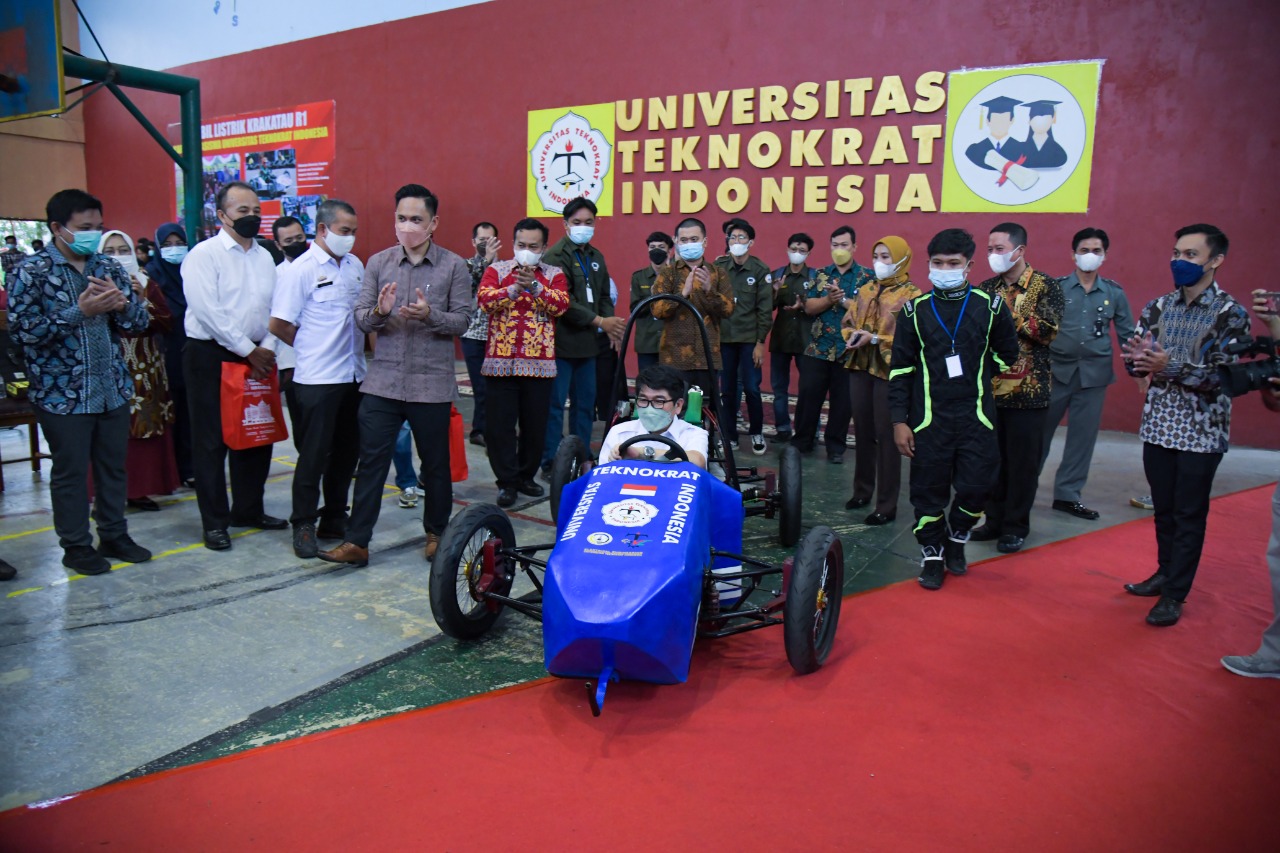 Universitas Teknokrat Indonesia (UTI), the Green Campus of the Champion held a Faculty of Engineering and Computer Science Expo 2022 activity at the Student Center on 26-27 January 2022. The activity carried the theme “building a golden Indonesian generation in 2045 through appropriate technological innovation”.

In this activity, the Universitas Teknokrat Indonesia introduced an electric racing car by UTI Electrical Engineering Students. The Expo event was inaugurated by the Head of Balitbangda Lampung Province, Ir. Hamartoni Ahadis, M.Si, from the Lampung Provincial Government, who has a role in the development of innovation and science and technology in Lampung Province.

When the introduction took place, Hamartoni drove the electric car to feel the sophistication of the electric car, as well as a sign of the inauguration of the activities of the Faculty of Engineering and Computer Science Expo 2022 witnessed by principals, teachers, and vocational students from Bandar Lampung and the Regency.

Hamartoni said that he really appreciates the academics of the niversitas Teknokrat Indonesia who continue to achieve IT-based achievements and carry out various IT-based activities. One of those activities is this expo.

This activity is the first expo in Lampung held by a private university. He hopes that this activity will motivate other universities.

He also hopes that student products produced by students will not only stop at prototypes, but can be developed into great works that can be useful for the community. This development can be assisted by entrepreneurs and the government.

“Surely it can be useful for the community. Because what I see the prototypes here are related to community activities, one of which is agriculture,” said Hamartoni.

Because this shows that Universitas Teknokrat Indonesia students not only have academic achievements, but also have innovative and useful products for society.

One of the supervisors of Electrical Engineering at the Universitas Teknokrat Indonesia, Novia Utami Putri, said that this electric car was made for one year, and has a speed of 70 km/hour. This electric car remains stable even though it is run on the highway.

This electric car does not use fuel. But it uses three batteries, which when fully charged can run for 2.5 hours. To charge the battery from empty to full it only takes 3-4 hours.

This electric car will continue to be developed and will be included in the December 2022 national competition organized by the Indonesian Electric Car Community.

Finally, he also tested the presence of agricultural equipment to electric racing cars by 25 students.

“There are many interesting things, such as a coffee bean selector, then related to water energy and its application, the business world should not be abandoned. So there must be access and facilities to the business world that are useful for the community. Cars should be tried again in other activities, These phenomenal works of electric racing cars can be included in electricity-based competitions, over time they can develop, they must not be left behind, they will be oppressed,” he said.

FTIK Expo 2022 showcases the creativity and innovation of appropriate technology for students at the Universitas Teknokrat Indonesia, Sang Juara Green Campus, which consists of:

In addition, this activity was also enlivened by the Student Association in the Faculty of Engineering and Computer Science. The total standbooth at the FTIK Expo was 52 booths. The activity was also attended by 530 participants from Bandar Lampung, South Lampung, and Pesawaran Vocational Schools.