ARRIVING IN THE COUNTRY FROM THE UNITED STATES,
STUDENT MEETS RECTOR OF UNIVERSITAS TEKNOKRAT INDONESIA 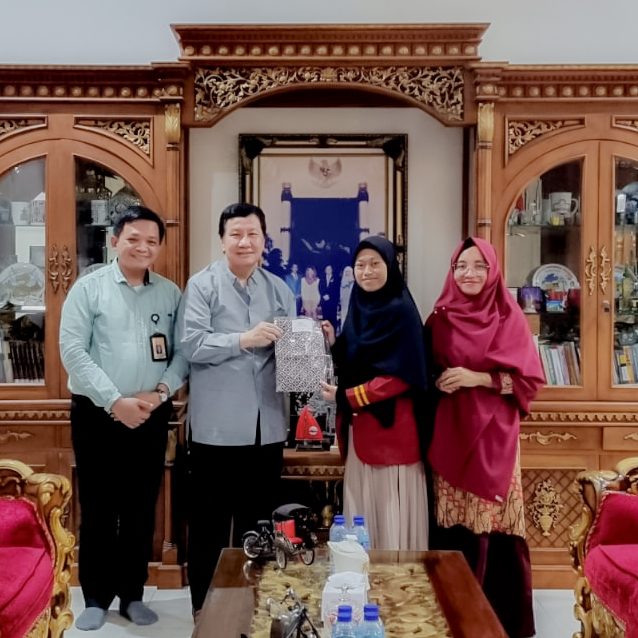 Vina Qurrota Akyuningrum has arrived in Lampung. Vina has even met friends at her campus, the English Language Education Study Program, Faculty of Arts and Education, Universitas Teknokrat Indonesia.
Vina spent one semester at the University of Central Missouri, United States, on an international student exchange program. there are 12 students from Indonesia who passed the program. From Sumatra, only Vina is one.
Today Vina is in touch with the Chancellor of Universitas Teknokrat Indonesia, Dr. HM Nasrullah Yusuf, SE., MBA. Vina told some of her experiences while studying in Uncle Sam’s country.
Vina said, Vina competed while studying with students from many countries. For example from Mongolia, South Korea, Japan, and others. Vina feels how disciplined it is to study in that country. Vina spent 12 credits while studying at the campus.
“It’s a tremendous amount of work. Thank God I was able to live well with very satisfying results or grades,” he said.

Vina also said that she had to adapt to food. Every day Vina eats food in the form of baked potatoes topped with cheese. He admitted that he missed the cuisine in the country.
What is also special is that Vina spends Ramadan in this superpower. There he lived in a dormitory and twice a week visited his foster family in America.
Vina also had the opportunity to see the Harvard campus and wanted to continue her Masters at the world-renowned campus. Vina said, Vina studied seriously because she wanted to get maximum results and be able to compete with students from other countries from all over the world.
Vina also said that Vina met with the Rector or President of the University of Central Missouri Mr. Roger J Best, Ph.D. Vina also had the opportunity to meet with a United States senator, Denny Hoskins. Vina invited both of them to visit Indonesia and her beloved campus, Universitas Teknokrat Indonesia.
The Rector responded to Vina’s story happily. The Chancellor said it was not easy to be one of the 12 students from Indonesia who passed the scholarship program to study in the United States.
The Rector said that Vina’s fighting spirit was extraordinary and Vina was impressed with it.
The Rector also advised Vina not to be arrogant. Don’t feel like you’ve been to college in the United States, and then you get excited.
The Rector said that Vina should be more introspective and humble. And always motivated to complete studies with excellent results.
The Rector also wanted all Teknokrat students to have the same learning ethos as Vina. Thus, they can compete to be a better person. And, some continue their studies abroad with scholarships.