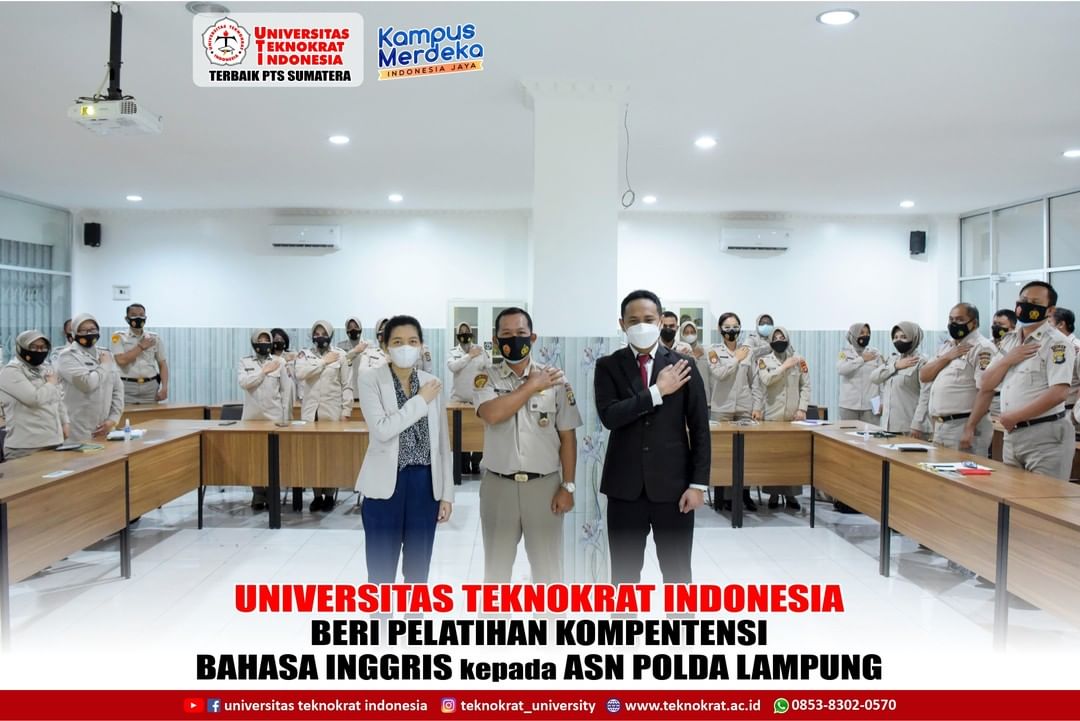 The Best PTS Sumatra, which is equipped with qualified technology and also a spacious and comfortable room. A total of 40 Police Civil Servants (PNS) who work at the Lampung Regional Police received guidance on improving English language skills through the training. The training was held at the Universitas Teknokrat Indonesia Best PTS Sumatra for 3 days from 9 to 11 November 2021 from 08.00 – 12.00 WIB.

This training was filled with a lecturer at the Faculty of Letters and Education at the Universitas Teknokrat Indonesia, the Best PTS Sumatra, named Dina Amelia S.S., M.Hum. He provides English language training that focuses on understanding the text, determining main ideas, specific information, and vocabulary. Vocabulary training aims to increase vocabulary so that it helps participants in answering questions from the text presented

Dina, Lecturer at the Faculty of Letters and Education at the Best PTS Sumatra University of Teknokrat, said that knowledge and improving English language skills are important so that every Police Civil Servant (PNS) is able to follow the development of information conveyed in English. This knowledge will also improve the ability to work in the field. Including to quickly understand the distribution of information circulating through foreign mass media or social media.

Deputy Chancellor of the Universitas Teknokrat Indonesia Dr H Mahathir Muhammad SE MM said this form of training was one of the campus’s contributions to Civil Servants (PNS) including those who work in the realm of the Police. Especially the Lampung Regional Police.

Mahathir said that the lecturers who teach English courses do have adequate abilities. Including to provide training to improve English language skills to employees and civil servants or ASN.

Mahathir said the ability to speak English had become a necessity. Especially for those who work in the realm of public service. The spread of information that is rife in foreign mass media is also a concern. Because, there is a lot of useful information there but it’s hard to grasp its meaning. Therefore, it is hoped that after receiving training, the English language skills of all Polri Civil Servants (PNS) at the Lampung Regional Police can increase significantly.

The English language training aimed at the Lampung Police was opened by the Chancellor of the Universitas Teknokrat Indonesia Best PTS Sumatra, Dr. H.M. Nasrallah Yusuf SE. MBA. And also represented by the Vice Chancellor for Cooperation and General Affairs, Achmad Yudi Wahyudin, M.Pd. The English language training is expected to help increase the knowledge of Lampung Regional Police members in speaking English by using correct diction in writing and orally.