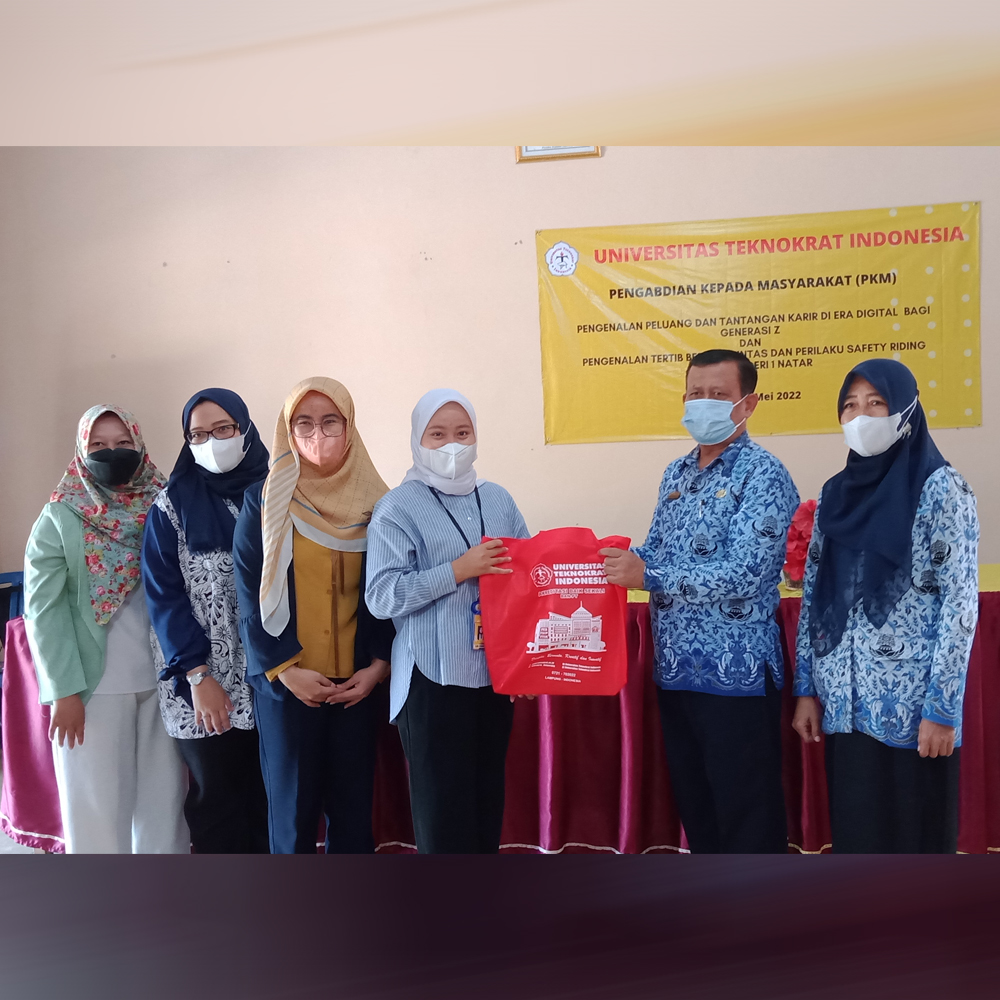 The team of outstanding lecturers and students from the ASEAN’S Best Private University, Universitas Teknokrat Indonesia, held a Community Service (PkM) at SMAN 1 Natar, South Lampung.
PkM was attended by three lecturers, namely Lia Febria Lina, M.Sc. from Management Study Program; Nicky Dwi Puspaningtyas, M.Pd. from the Mathematics Study Program and Fera Lestari, M.T. from the Civil Engineering Study Program. There were also four students from the Management Study Program and Mathematics Study Program, namely Irna Masturiyah, M. Aditya N, Intan Maulya, and Rahma Novita Tirani.
According to Lia Febria Lina, this PkM is intended to provide an understanding of Generation Z about the opportunities to become entrepreneurs by utilizing digital media.
“When viewed from the results of the Central Bureau of Statistics Survey, there are two generations that have a large proportion, namely Generation Z as much as 27.94 percent, and Millennial Generation as much as 25.87 percent of the total population of Generation Z, namely people born in 1997-2012 ) and the Millennial Generation was born in (1981-1996),” said Lia.
Based on this, high school students are Generation Z. Generation Z is known as a generation that is very familiar with the internet and social media.

“So, this community service is intended to provide understanding for students to realize that the advantages they have must be put to good use, such as starting a business by utilizing the internet and social media,” she said.
She continued that one of the careers that can develop during this digital era is to become an entrepreneur.
“Currently we can use various strategies with the help of the internet, such as reaching consumers, promoting products to forming a brand image in the minds of consumers,” she said.
This understanding is given to illustrate that the current internet era can provide positive benefits and benefits if used properly and optimally.
In addition, as a student and also an entrepreneur, M. Aditya Nugraha also shared his experience as an outstanding student who also developed his business by utilizing social media.
He shared his experience of how to form a brand image in the minds of consumers. One of them is through brand identity that is easy to remember, visual concepts, and also using taglines on the internet.
On a different occasion, the Vice-Rector of the Universitas Teknokrat Indonesia (UTI) said that PkM is a superior program at UTI which is expected to be very helpful to the community. This time PkM at SMAN 1 Natar, South Lampung, can give some benefits that were provided by UTI’s Lecturers and Students. Hopefully, Generation Z can use social media to become a successful entrepreneurs and never give up in this era, said Mahathir. (Teknokrat)