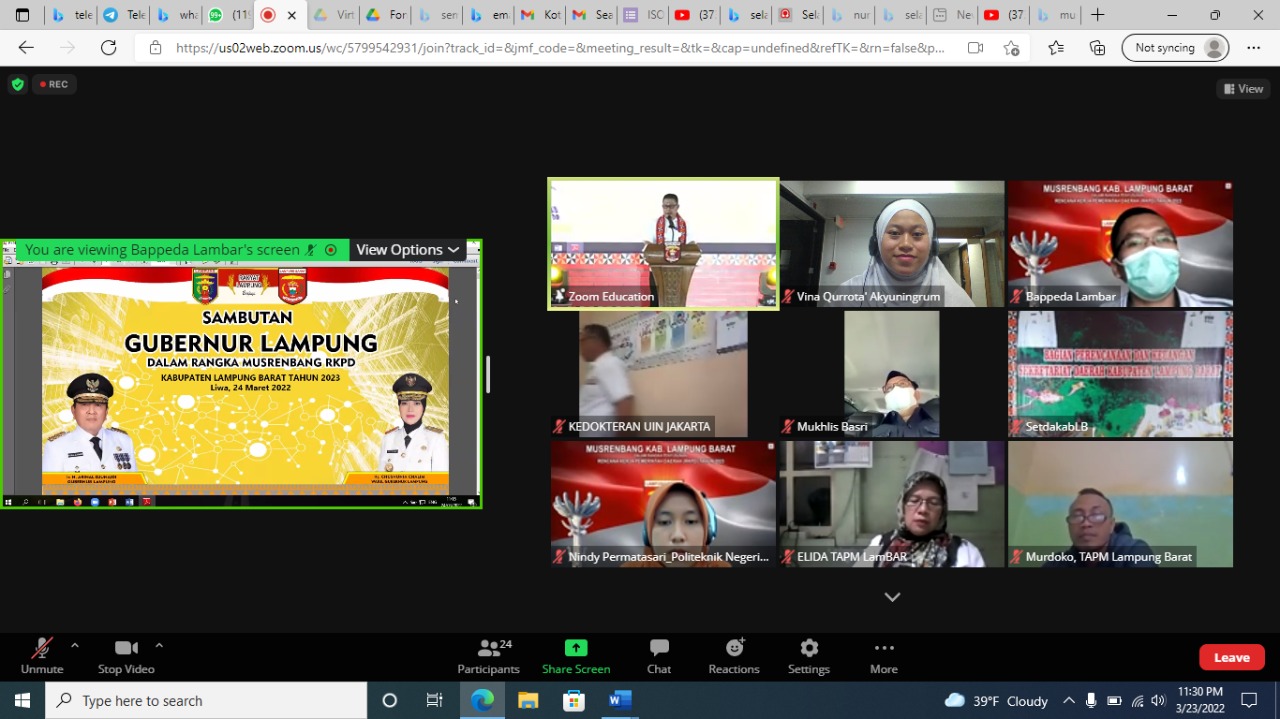 The Regent of West Lampung H. Parosil Mabsus feels proud and appreciates one of the students of Universitas Teknokrat Indonesia ASEAN’s Best Private University on behalf of Vina Qurrota Akyuningrum who is an alumni of SMA Negeri 1 Sukau, West Lampung.

Vina is a student from West Lampung with extraordinary achievements and received a one-semester scholarship to study at the University of Central Missouri, United States in the United States Global Undergraduate Exchange Program (Global UGRAD) 2021/2022.

The Regent of West Lampung H. Parosil Mabsus feels proud, because Vina Qurrota Akyuningrum, who is familiarly called Vina, is a native from the West Lampung region who was born in Lumbok Seminung District on July 12, 2001, who was chosen to be the only one to represent Sumatra out of 11 students from Indonesia who received the scholarship.

“It is a matter of pride for us, Vina will inspire other students to achieve more,” said Parosil.

Vina, an undergraduate student in English Education, Faculty of Arts and Education (FSIP) at Universitas Teknokrat Indonesia, has completed her final semester exam at the University of Central Missouri with a 4.00 GPA.

Vina’s achievement has actually been seen when she was only one month studying at the University of Central Missouri, United States. At that time, he completed the quiz with satisfactory scores by taking 6 credits of Reading, 6 credits of Writing, 5 credits of Communication Skills, 5 credits of Grammar and the American Culture Seminar.

Last week, Vina completed all the final semester exams at UTI online with satisfactory results with a GPA of 4.00 out of 10 courses out of 20 credits. Vina competed with native students at the University of Central Missouri and other peers from various countries.

Vina’s English skills are very proficient. He also often argues with other students and lecturers when explaining something in lectures on campus.

Before receiving the UGRAD United States Global Program Student Exchange Scholarship 2021/2022 at the University of Central Missouri, United States, Vina had already made many achievements.

It is a matter of pride for the Regent of West Lampung, because Vina was able to meet directly with the Rector of the University of Central Missouri, Mr. Roger J. Best, Ph.D. in his office where not everyone can easily meet the Rector.

The Regent of Parosil hopes that Vina Qurrota Akyuningrum’s achievements can trigger the progress of education in West Lampung Regency to be even better.

Vice Rector of Universitas Teknokrat Indonesia Dr. H. Mahathir Muhammad, SE., MM. expressed his gratitude for the appreciation of the Regent of Parosil Mabsus. Mahathir is very happy that the local District Government can appreciate what Vina is doing in the United States.

Mahathir also wants children in West Lampung to follow Vina’s success. Vina is also open to her campus to students from West Lampung. Mahathir agreed with the Regent that the potential of the children there was extraordinary. It’s just a matter of how the campus can polish them and provide extra supplies to emerge as the generation of winners, the generation of champions. (teknokrat)