THE RECTOR OF THE UNIVERSITAS TEKNOKRAT INDONESIA WIN A NATIONAL AWARD 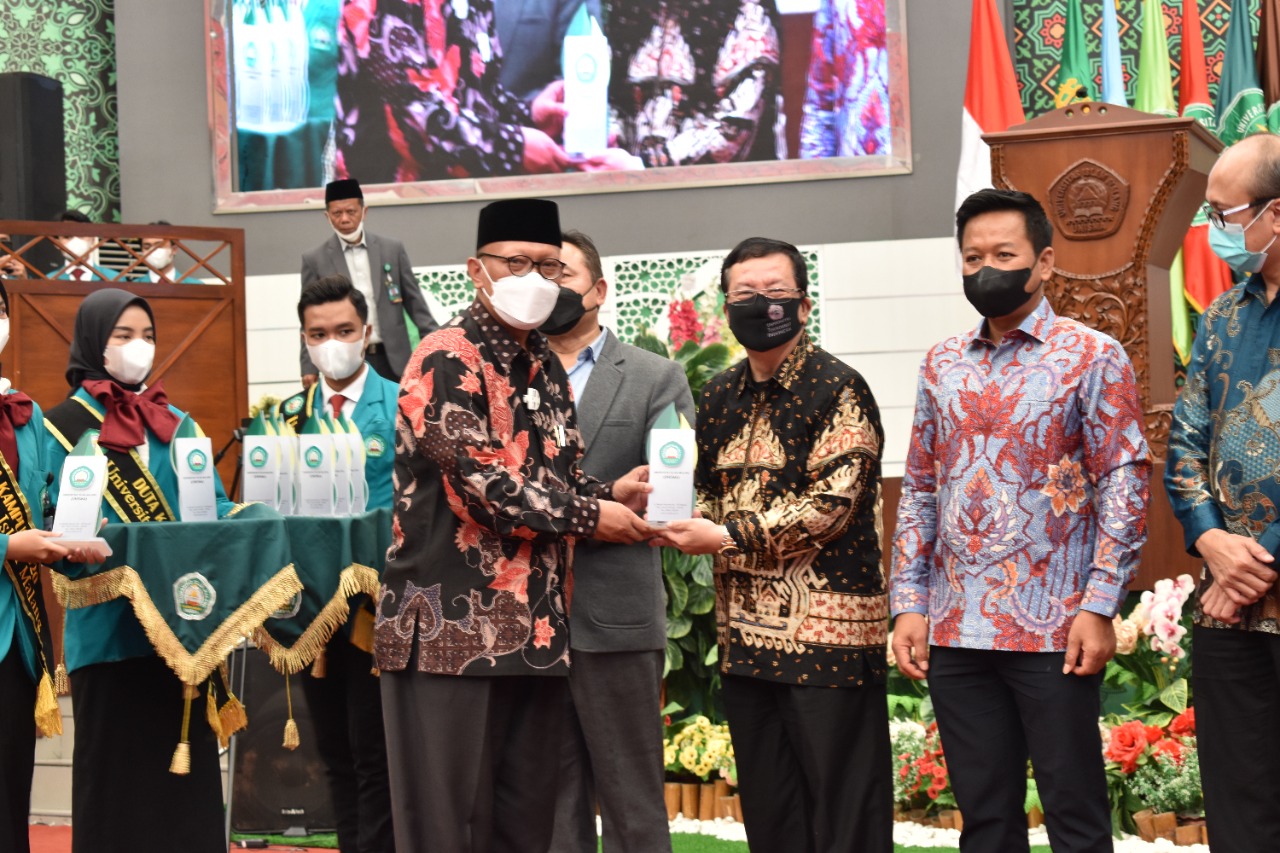 East Java Governor Dra. Hj. Khofifah Indar Parawansa, M.Sc. also give appreciation to Dr. HM Nasrullah Yusuf, SE., MBA. for the two historical works he created, namely the hymn and the FRI march. Both of them are part of the history of FRI’s journey, which has been established since 1998.

At the age of 23, FRI now has hymns and marches that are included in the AD/ART. The FRI hymn and march must be echoed at every FRI official event, including the National Seminar on Strategy and Innovation for Higher Education Development Towards Global Competitiveness at the Islamic University of Malang.

The seminar was opened by the Minister of Education and Culture, Research and Technology, Nadiem Anwar Makarim, B.A., M.B.A. and the Governor of East Java Dra. Hj. Khofifah Indar Parawansa, M.Sc. which was attended by 150 leaders of well-known public and private universities in Indonesia. Hymns and Mars FRI created by Dr. HM Nasrullah Yusuf, SE., MBA. echoed at the beginning of the event after the anthem Indonesia Raya.

East Java Governor Dra. Hj. Khofifah Indar Parawansa, M.Sc. in his remarks conveyed the success of the East Java Provincial Government in dealing with Covid.19 and building improving the quality of education in East Java.

This great and valuable work of FRI hymns and marches contributed to the name of the Indonesian Technocrat University and Lampung Province on the national stage. The FRI hymn entitled Tri Dharma Bagimu Negeriku and the FRI march entitled Mentari Bangsa by the sons of Lampung are very important parts of FRI’s future journey.

The Chancellor of the Best PTS Sumatran Indonesian Technocrat University “The Champion’s Campus” is indeed cold-handed in creating songs and poetry. With his talent and love for art, he created FRI hymns and marches to inspire enthusiasm in serving the world of education.

The hymns and marches of FRI are very visionary in accordance with the spirit of FRI as a place for seeding big ideas and ideas in developing Indonesian education and producing reliable and contributive scholars. In addition to the delivery of the national award, the Indonesian Technocrat University also signed an MoU with the Islamic University of Malang in the context of implementing education, research, and community service at the international level.

The Chancellor of the University of Indonesia felt proud and touched that his work became an obligatory anthem in the Indonesian Chancellor’s Forum and on this occasion the FRI hymn and march were sung directly by the student choir of the Islamic University of Malang in front of the Governor and his staff as well as leaders of well-known public and private universities in Indonesia at the event. national seminar, said HM. Nasrallah Yusuf.

Following are the lyrics of the song Mars Forum Rector Indonesia with the title Mentari Bangsa and the Hymn for the Indonesian Chancellor Forum with the title Tri Dharma Bagimu Negeriku by HM Nasrullah Yusuf:

SUN OF THE NATION

Smart and skilled with noble character

In your burning chest, the spirit of the nation, Build a superior generation

Based on faith taqwa in the one

Let’s Defender of the Homeland Knights

Scholars are created for a glorious Indonesia…

On your shoulders, Great Ideals

For the Prosperous People

Son and Daughter of the Nation

Your heart is beating

Be Devoted We Are Devoted

Giving birth to a continuation

Tri Dharma… For you… My country…