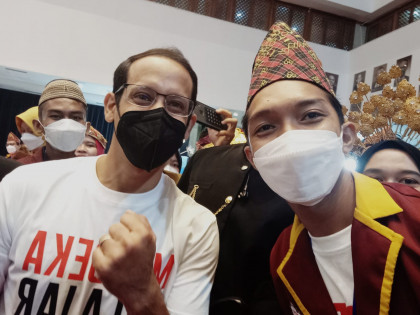 President of the Student Executive Board (BEM) of the Universitas Teknokrat Indonesia, Adji Agung Penggalih, attends the commemoration of Youth Pledge Day at the Ministry of Education, Culture and Research and Technology, Thursday, 10/28/2021. The series of events itself has been held since October 26, 2021.

Besides Adji, BEM of the Universitas Teknokrat Indonesia

also sent other administrators namely Janata Shofi Al Falaq and Eka Putri Adamansyah. During the dialogue with Minister Nadiem Makarim, Adji became one of the responders. He gave some ideas on the world of education.

Steadfastly, the President of the BEM of the Universitas Teknokrat Indonesia stated that character education is a necessity today. The reason is that the politeness of students and students to lecturers and teachers is considered to have been degraded.

Adji is concerned about several incidents where students no longer have respect for teachers. Even until there are students who challenge the teacher to a fight. Adji said character education must be arranged systematically. Thus, the mental and morals of students and students can be formed.

He wants politeness, etiquette, and so on to be ingrained among students and students. “We must prioritize etiquette,” he said.

Deputy Chancellor I Dr H Mahathir Muhammad SE MM said the campus was very proud that the President of BEM could have a dialogue and convey ideas directly in front of Minister Nadiem Makarim. Mahathir said that was the personality of a leader. Adji, said Mahathir, was judged to be able to convey his ideas in a coherent, structured, and contained manner.

Mahathir said that what Adji said had become a necessity. The world of education, he said, requires character education that is able to create educated people with a noble mentality and character. Apart from being targeted to achieve good academic and non-academic achievements, students are also required to have ethics.