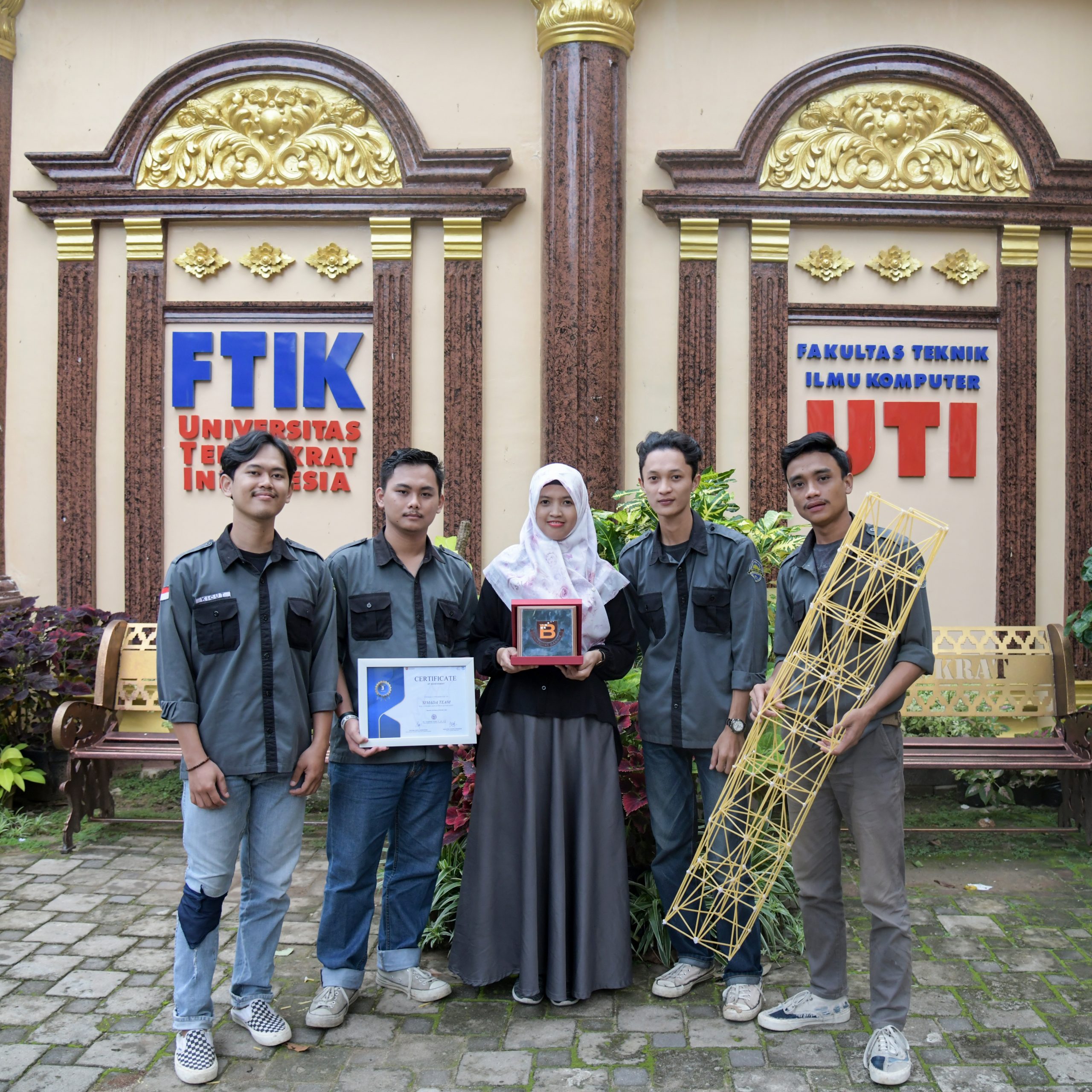 Students of the Civil Engineering Study Program, Faculty of Engineering and Computer Science, Universitas Teknokrat Indonesia, won 3rd Place and 1st Place in the Earthquake Resistant Building Design Competition Branch in the Spirit of Civil Engineering, Bakrie University 2022.
This information was announced at the closing ceremony of the event on June 25, 2022.
In the Bridge Structure Competition Branch, there were 2 teams with Advisory Lecturer Dian Pratiwi, S.T., M.Eng. The UTI 1 team with the name SIMADA won third place with Rian Purnama’s chairman and members, namely Guntur Aji Pangestu. Team 2 of UTI with the name CIVILIAN won 1st Place with Wawan Kurniawan and a member, Afran Ar Rasyid. The first winner is the Bandung Institute of Technology and the second winner is the Jakarta State University. These two teams beat other teams from various regions in Indonesia, namely teams from the University of Indonesia, Jakarta State University, Jakarta State Polytechnic, Lampung University, and 10 other teams from various universities in Indonesia.
In the process of implementing this earthquake-resistant building the main material used is long macaroni and which is glued using an adhesive in the form of hot glue. According to Rian, even though he only made the structural components, Rian and his team tried to assume that the structure they made was ergonomic and was strong against earthquake loads.
The Head of the Civil Engineering Study Program, Dian Pratiwi, M.Eng. at the same time as the supervisor stated that this branch of the competition was being followed for the first time but Dian as the supervisor was quite surprised by the achievements of the guidance teams. Dian also hopes that this achievement can be the beginning of all the achievements that will be achieved by students in the Civil Engineering Study Program.

In addition to this competition, the Civil Engineering Undergraduate Study Program has also won several competitions, namely bridges, photography, essays, and videography at regional and national levels.
The Vice Dean for Student Affairs, Aulia Rahman Isnain, S.kom., M.Cs is also proud of the achievements that have been achieved by students of the Civil Engineering study program at Universitas Teknokrat Indonesia. According to him, besides these students are active in internal campus activities, they are also students who excel and are active in organizations.
Vice-Rector, Dr. H. Mahathir Muhammad S.E., M.M. added that this achievement in civil engineering is very proud. Moreover, Universitas Teknokrat Indonesia can outperform several big campuses in Indonesia.
Mr. Mahathir hopes that Universitas Teknokrat Indonesia students can improve their knowledge and skills in this field. So, when there is more competition, they can improve their achievements.
Mr. Mahathir said he was satisfied with the team’s determination and hard work. He also gave appreciation to lecturers who wanted to guide students so that they recorded brilliant achievements (Teknokrat).