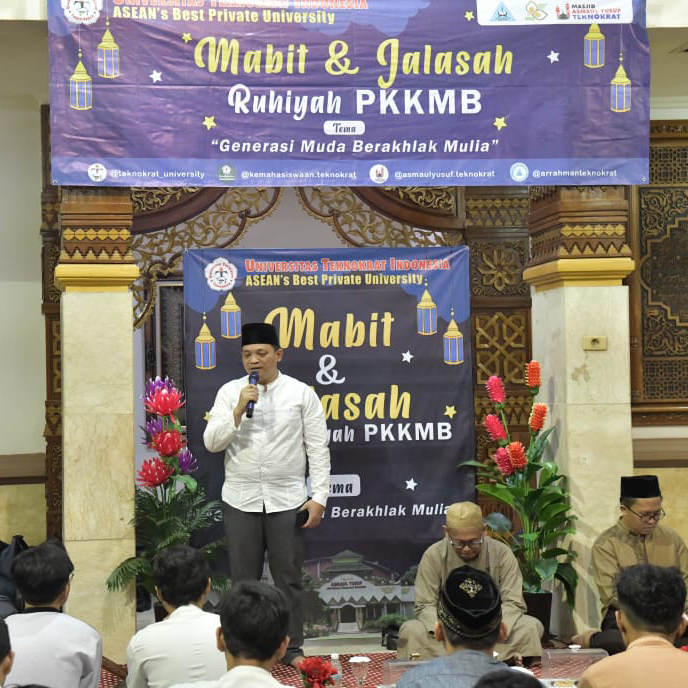 Universitas Teknokrat Indonesia held another phase II human development and piety or mabit night activity for new students. The activity was held at the Asmaul Yusuf Mosque, the local campus, Saturday, 1/10/2022. Present as a lecturer was Ustaz Fadli Muhammad Yusuf who delivered material about the young generation of noble character.

Participants are new students from the class of 2022 from the Management, Information Systems, and Computer Engineering study programs. The committee was entrusted to UKMI Ar-Rahman Teknokrat.

The activity was attended by Dr. Heri Kuswoyo, M.Hum, Parjito, S.Kom., M.Cs., Dean of FSIP Universitas Teknokrat Indonesia, in his speech said that as students, they should not only have intellectual intelligence that is obtained in the classroom, but they must have other intelligences that are not less important, such as social intelligence, emotional intelligence, and spiritual intelligence, one of which they can get by participating in mabit activities like this. For this reason, this mabit activity is in accordance with the aim of forming students who have good character, good character, and noble character.
The series of activities include congregational maghrib prayers, dinner together, congregational Isha prayers, group recitations, spiritual studies, muhasabah, introduction to Quran Reading Guidance (BBQ), congregational tahajjud prayers, recitations, dawn in congregation, reading Almatsurat, morning exercise, dhuha, and Closing.

The aim of this student mabit is to form a generation of noble character. In addition, creating a generation that is pious and has brilliant achievements in all fields.

Ustaz Fadli Muhammad Yusuf invites all new students of Universitas Teknokrat Indonesia to equip themselves with faith and piety as well as sufficient religious knowledge. Thus, they can live life on campus and religious life well.

Vice Rector of Universitas Teknokrat Indonesia Dr. H. Mahathir Muhammad, SE., MM. said that such mabit activities in the future will be further improved in quantity and quality. Mahathir believes that this way the campus can provide a good religious provision. In addition, it forms the noble personality of each student.

Mahathir said he was happy to be able to spend the night with the lecturers and students. In this way, true friendship and friendship will be created.