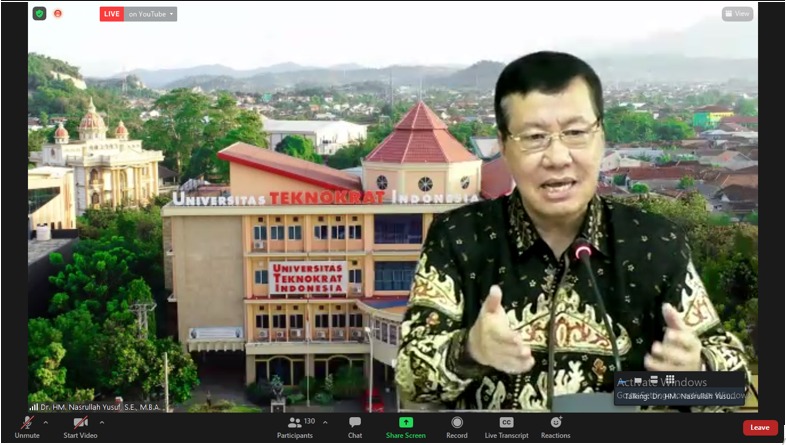 Rector of Teknokrat Indonesia University the best private university in ASEAN Dr. HM. Nasrullah Yusuf, SE., MBA. appeared as a speaker in the Red and White Talk Show with the theme “Efforts to Build a Campus Towards a World Class University”.

Indonesian Private Universities are required to be agile, agile, creative and able to take advantage of every momentum to progress.

Efforts to build a campus towards a world-class university can refer to several things, namely ranking, recognition, and assessment, said Nasrullah.

“This world ranking is very necessary and considered to be pursued by universities, especially private universities to improve the image and branding of campuses in the community, both nationally and internationally,” said Nasrullah.

On this occasion, Nasrullah also explained the ranking of the Student Rating Management Information System (Simkatmawa).

“Simkatmawa is a ranking of universities in the field of student management and achievement assessed by the Directorate of Learning and Student Affairs, Directorate General of Higher Education,” said Nasrullah.

Nasrullah also talked about managing the learning system in the network (Spada/LMS). The tips are using interesting learning media in the explanation of the material. For example via youtube.

“Implementation of the LMS platform by adding interactive features such as (Zoom and Google Meet, attendance lists, quizzes, and assignments), evaluating content and online activities regularly,” he said.

Strategic Steps to Build the Reputation of World Class University

Some accurate strategies, he added, should be planned, for example, think more broadly than others, such as regional visions and missions but with international standards. Can break the boundaries that others cannot do and we can do it. Of course, if it is done by the Chancellors outside Java. It’s not impossible, it’s definitely possible. Nasrallah explained.

The Rector of Teknokrat Indonesia University closed the Red and White Talk Show with “Let’s Fight Towards a World Class University”. (teknokrat)