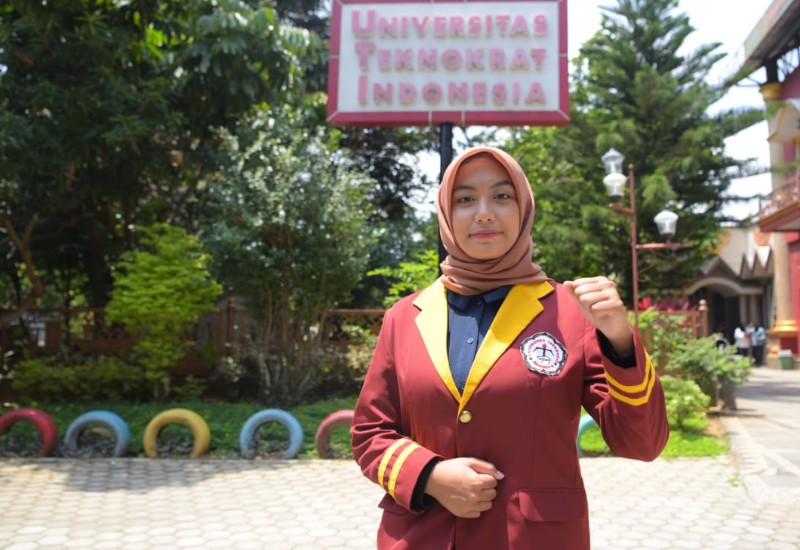 An outstanding student at the Universitas Teknokrat Indonesia, Shavina Lestiani, has been familiar with English since childhood. How not. This beautiful girl from the age of a toddler was brought to New York by her father

The father who works as a chef is the reason Shavina lives in Uncle Sam’s country. It is natural that his mastery of English is very good.

Shavina said that apart from the English culture, she is also diligent in reading, watching, and listening to all things related to the English language.

So, if he now chooses English Literature as his choice of studying at Teknokrat, there is a previous historical narrative.

Shavina said that she had also experienced different cultures. Especially when back in the country. The special deputy went to Gerning, Tegineneng, Pesawaran, as his home in Lampung.

This beautiful Dara, the eldest of two siblings, said that she had experienced cultural adaptation when she returned to the country.

Because she was in a village where the people were friendly and like to say hello, at first Shavina had a hard time. Understandably, in the United States, I did not find such a thing.

“At first it was the most difficult for me to say hello to my neighbors. Especially those who don’t know. Maybe they are thought to be arrogant,” said the woman who was born on December 24, 2002.

Shavina said that she has aspirations related to writing, such as becoming an editor, novelist, comic artist, and so on.

“Maybe it’s because I like to read that I just want to work in the world I mentioned earlier,” he said.

The activist at the Teknokrat English Club added that he occasionally writes in his diary. Most of the daily stories.

So far, Shavina still keeps the narration in the diary. He is not yet interested in uploading it to the Wattpad application.

“I’m afraid to be pegged at the number of people who read it. Even though I want good quality,” he said.